Dozens of students from the eight counties in the 54th District had the opportunity Monday to immerse themselves in state government and the process of passing new laws. The event was part of State Senator Jason Plummer’s (R-Edwardsville) Youth Advisory Council program.

“It’s great to see so many students from the district that are interested in the process of state government,” said Senator Plummer. “This event is an opportunity for them to learn about things like how to make policy, how policies are enacted into law, how that affects their families and their communities, and how they can have an impact on the process.”

Plummer’s Youth Advisory Council meeting was held at Kaskaskia College’s satellite campus in Vandalia. There, students had the opportunity to meet and hear from local elected officials to learn more about how government functions.

“I’m very interested in going to school to study political science and then on to law school to be a lawyer, so this is right up my alley, I love the opportunity, it’s an amazing experience,” Breese Central High School student Maggie Schrage. “I love that as a student, even at my young age, I get to have an impact.”

During the afternoon, students worked in small groups to discuss and develop ideas for new legislation, eventually pitching their ideas to the entire group. Following their presentations, students debated their various proposals before voting on one idea to move forward and be drafted in the form of mock legislation.

“One of the reasons I’m really glad to be here is that I think student voice is necessary in all aspects, especially in government,” said Vandalia High School student Leo Krueger. “It’s also really interesting to sit at a table with other kids from the 54th district and get all of our viewpoints in one space.”

“I think it’s really important for youth to have a voice in what they’re advocating for, seeing as how they’re the next generation that is going to be voting, and they’re going to be passing their own legislation,” Triad High School student Lillie Clark.

The students will take up their legislative proposal during the spring meeting of the Youth Advisory Council, which is tentatively planned to be held at the Illinois State Capitol in Springfield. There students will have the opportunity to hold a mock committee hearing on their legislation.

“I look forward to continue working with these students so that they can remain engaged in the process as they grow and become active, involved, citizens,” said Plummer. “We will need the next generation to help move our state forward and ensure that Illinois is able to grow. 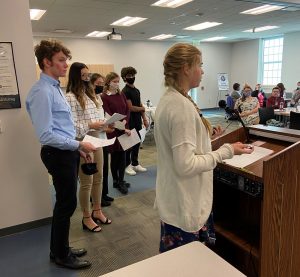 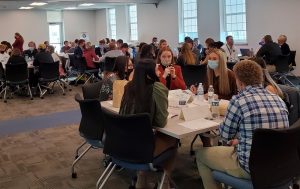 As Senate Republicans, our goal is to encourage job growth by developing an efficient, transparent, ethical state government with less regulation and lower taxes. We must leave a legacy of responsible government that will last for generations.

Want to stay up to date with your Senator?